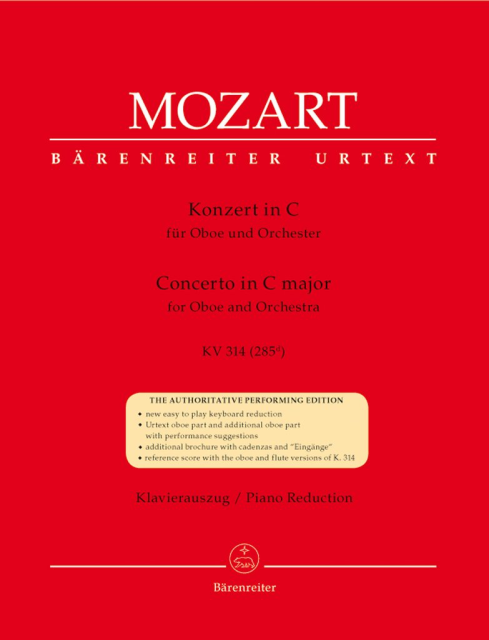 Edited by Franz Giegling, cadenzas by Frank de Bruine. This title is the piano reduction, and includes the solo oboe part. The score and set may be purchased by clicking here.

Wolfgang Amadeus Mozart's Concerto in C major, K. 314 was originally composed in the Spring or Summer of 1777 for oboist Giuseppe Ferlendis (1755-1802) from Bergamo, then reworked by the composer as a concerto for flute in D major in 1778. The concerto is a widely-studied piece for both instruments, and is one of the more important concerti for the oboe. As with his Flute Concerto No. 1, the piece is arranged for a standard set of orchestral strings, two oboes, and two horns.

While the original version for oboe had been lost before Alfred Einstein wrote his seminal work, Mozart: His Character, His Work, the oboe origin of the flute concerto was suspected, in part because of references in letters to a now-missing oboe concerto, as Einstein wrote, and of similar details in the orchestral string lines which suggested a transposition was used. Also, Einstein noted the two scores in D Major and C Major of the K. 314 Concerto in the Library of the Gesellschaft der Musikfreunde in Vienna, which led to the belief that the oboe concerto was the origin of the flute concerto. The orchestra parts of the composition and solo oboe part in C were rediscovered by Bernhard Paumgartner in Salzburg, in 1920.

In addition to an Urtext oboe solo part this publication includes a performance part prepared by Frank de Bruine . Given the close relationship between Mozart’s D Major Flute Concerto and the original concerto for oboe, a reference score has been included with the Urtext oboe part set above the Urtext flute part transposed to C Major. With this, performers have the opportunity to compare the versions and make qualified decisions on articulation based on the reliable Urtext of the New Mozart Edition.