Elegy for Innocence for bassoon and piano by Jeff Scott 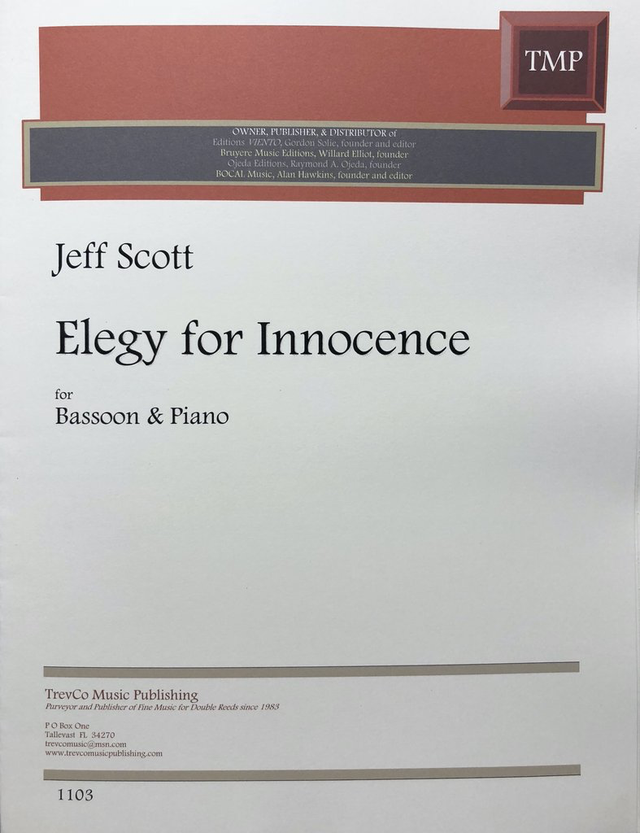 for bassoon and piano

This piece was premiered by Monica Ellis, to whom it is dedicated to critical acclaim, at the 2009 IDRS Conference in Provo. A challenging, tuneful, and creative single movement work by the hornist of the Imani Quintet.

A native of Queens, NY, Jeff Scott started the French horn at age 14, receiving a scholarship to go to the Brooklyn College Preparatory Division. His greatest influence however, came from his first teacher, Carolyn Clark, who taught the young Mr. Scott for free, giving him the opportunity to study music when resources were not available. He received his Bachelor's degree from Manhattan School of Music, and Master's Degree from SUNY at Stony Brook. During those years Mr. Scott studied with Jerome Ashby, David Jolley, Scott Brubaker and William Purvis. It was during his collegiate studies that Mr. Scott learned wind quintet repertoire through intense coaching with the late Samuel Baron and other members of the New York Wind Quintet. As the French Hornist for the Mercury Brass Quintet, Mr. Scott has given many workshops and performances under the auspices of Arts Genesis, Young Audiences of New York, and the Midori Foundation. Mr. Scott is also the co-founder of the jazz band "The New Jazz Resolution" and the Imani Winds, a Grammy nominated wind quintet.

Mr. Scott has been a member of "The Lion King" Orchestra on Broadway since 1997, and has performed in other Broadway shows such as "On the Town" and "Showboat". Mr. Scott also enjoys active work as a studio musician. He can be heard on many movie soundtracks including Spike Lee's Clockers, featuring music by Terrence Blanchard, and on recordings with notable artists such as Chico O'Farill, Robin Eubanks, Freddy Cole, and Jimmy Heath, amongst others. Additionally, he has toured with artists such as Barbra Streisand and Luther Vandross and is a member of the Alvin Ailey Dance Theater of Harlem Orchestra. Mr. Scott's arranging and composing credits are many, and include scoring the off-Broadway production of "Becoming Something", The Canada Lee Story, and many arrangements and original works for Wind and Brass Quintet, Horn Quartet, and Jazz Ensembles.

Mr. Scott is on the Horn faculty of the music department at Montclair State University in Montclair, New Jersey.