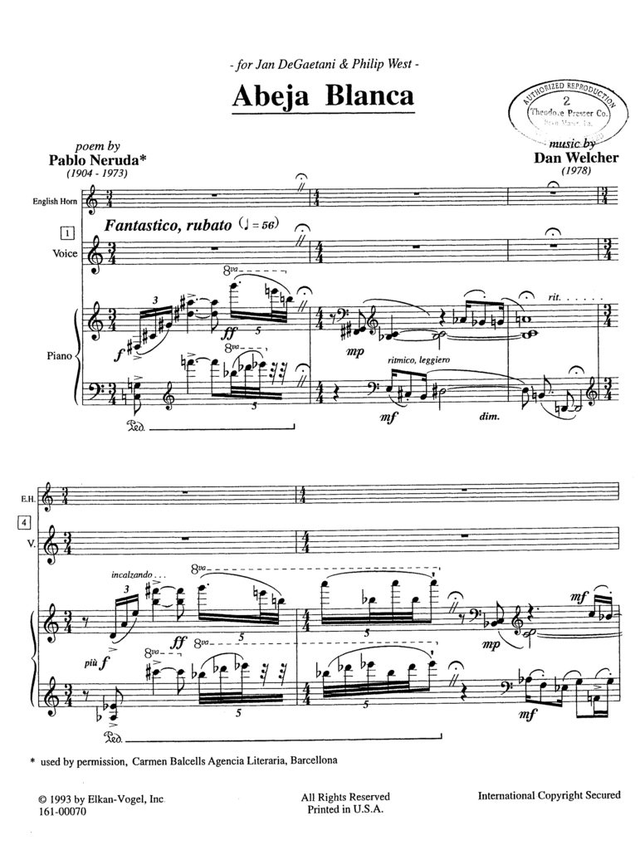 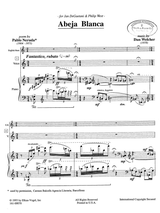 This work was commissioned by the late American singer Jan DeGaetini, and was premiered at the 1979 Aldeburgh Festival in England. The terms were that the piece should feature the English horn as a co-soloist along with the piano. The Chilean poet Pablo Neruda's Twenty Love Poems and a Song of Despair contains a number of rather erotic poems, but the poem Abeja Blanca also contains (as the title suggests) a bee. Here was my raison d'etre for the English horn! The poem itself suggests that the White Bee is an absent love, perhaps a lover who has died or abandoned the poet. The poem contains vivid imagery around the bee itself in the first stanza: "drunk with honey", "the final rose" etc. But by the second stanza, the bee has clearly become a symbol: she (it is definitely a she) has the body of a "frightened statue", with "cool arms of flowers and a lap of rose", with breasts that seem "like white snails".

Te author, in his musing, cannot forget her, and the way she "buzzes in his soul". Perfect stuff for music, this. I was able to entwine the fluttery English horn lines with the more lyric ones of the singer, so that by the end of this 13-minute work, with the piano now totally absent, only the poet and his muse are left- buzzing together, in and out of unisons.