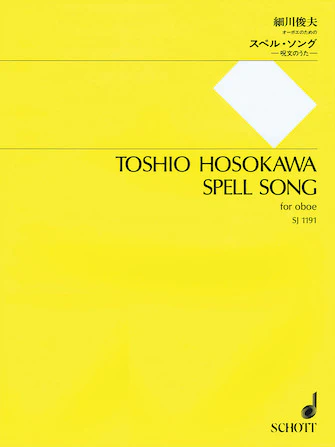 I imagined the oboe to be a primitive instrument with a double reed, wood, and a cylinder. Perhaps music was born through a spell that calls upon the supernatural such as gods and spirits, and the voice became the 'song', and this 'song' creates an arc to the spirits. Each phrase of the 'song' has a form that is like eastern calligraphy, with a central note in one phrase. How to flexibly express the lively motion of the central note's 'life' is the major theme behind the performance. My music is a kind of calligraphy of space and time through the use of sounds. –Toshio Hosokawa

Toshio studied in Germany but returned to Japan, finding a personal style inspired by classical Japanese music and culture. He has composed operas, the oratorio Voiceless Voice in Hiroshima, and instrumental music.

He was the cofounder and artistic director of a Japanese festival for contemporary music and has been a composer in residence at international festivals such as the Venice Biennale, Lucerne Festival, Warsaw Autumn and Rheingau Musik Festival. His operas premiered at the Munich Biennale and La Monnaie, among others.